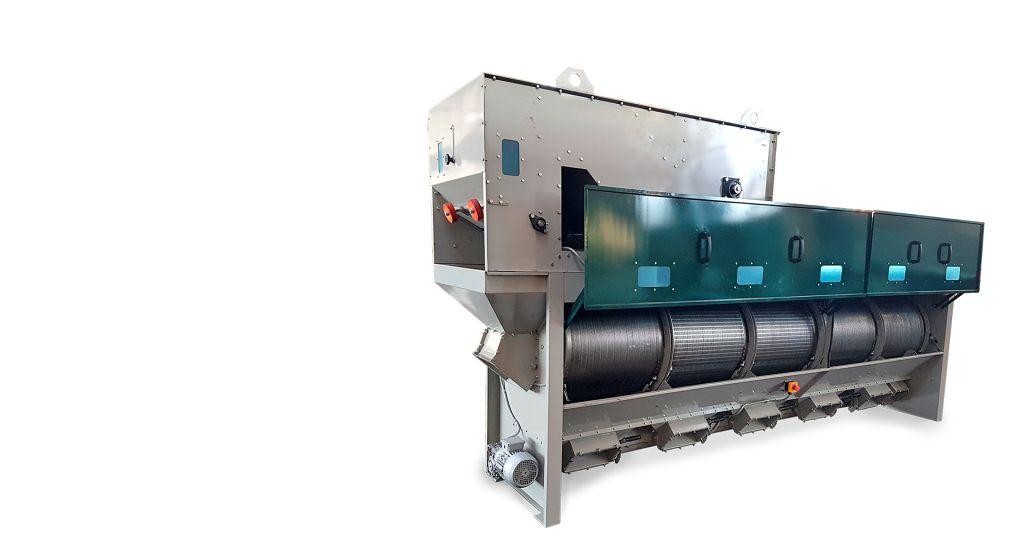 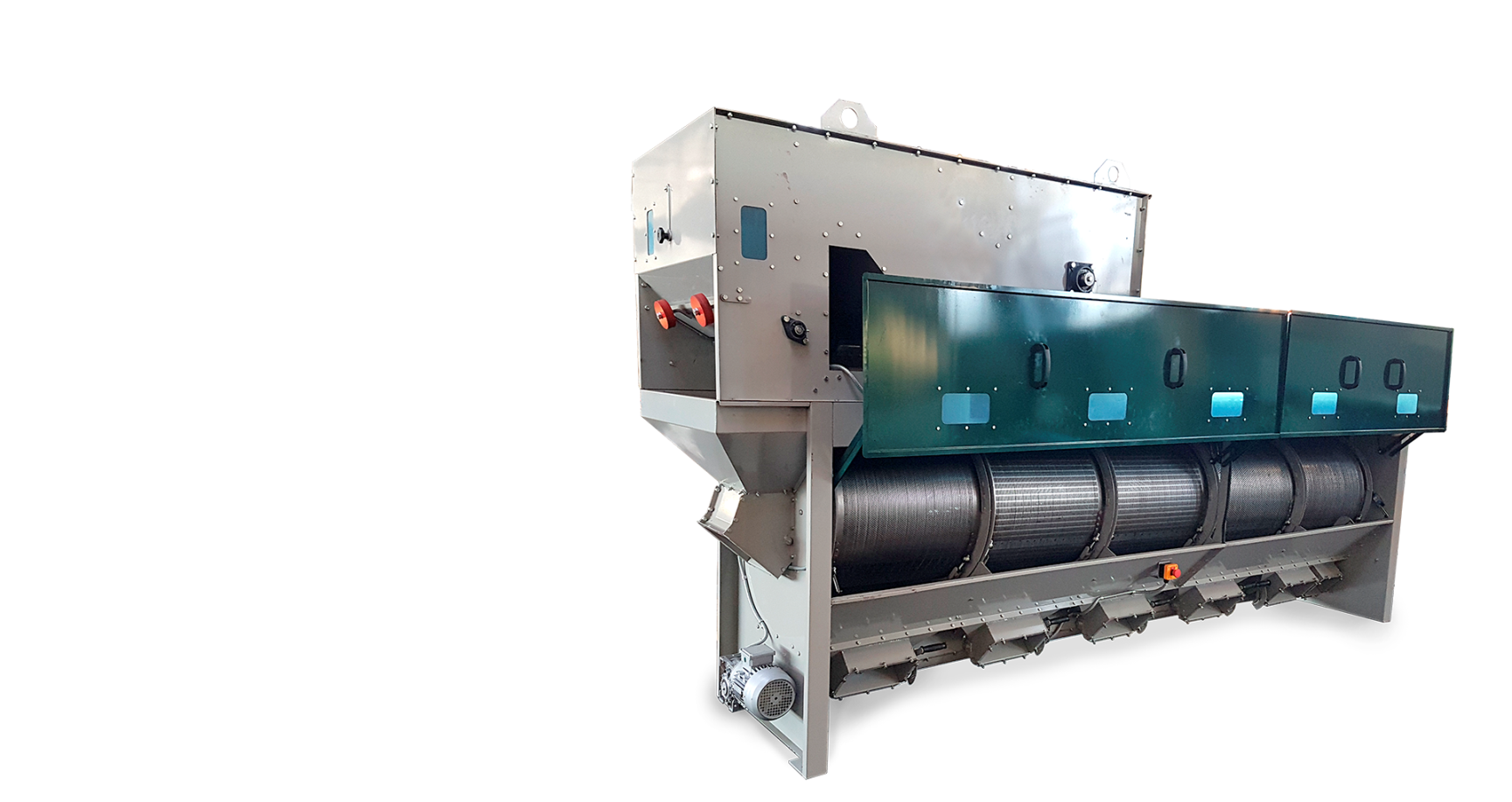 OBC-355 is the most multifunctional
grain cleaning machine
with drum separator in the world.

The multifunctionality of the OBC-355 drum cleaner allows it to be used to separate and calibrate a wide range of products (for example: a mixture of any grain, grain with very high clogging, corn with very high humidity, cotton fibers and seeds, glass balls, etc.). The OBC-355 grain cleaning machine can be used both for high-quality calibration and for preliminary cleaning with large volumes of processing.

Multifunctionality is achieved due to the innovative design of OBC-355, consisting of a large number of flap valves, screws and 2 main parts:

Aspiration and cleaning and calibration blocks OBC-355 can be used separately or together, depending on the need.

Grain with impurities enters the OBC-355 through the inlet pipe of the suction unit and is blown with an oncoming air stream, while light impurities are separated. After this, the grain enters the drum with sieves, where it is cleaned from impurities that differ in size. Sieve cleaning is carried out by blocks of movable rollers.

The obtained fractions of refined grain and impurities are separately removed from the machine through the exhaust pipes and auger (see operation diagram). The number of options for cleaning and removing grain and waste exceeds 50.

The OBC-355 grain cleaning machine has many advantages, the main of which are multifunctionality and versatility, high cleaning efficiency, gentle handling of grain, no vibrations, quick replacement of sieves, quick adjustment of productivity and direction of grain output, the possibility of application for products that are difficult to sort, for example, simultaneous purification and separation of a mixture of three types of grain at once (see the benefits section for more details). 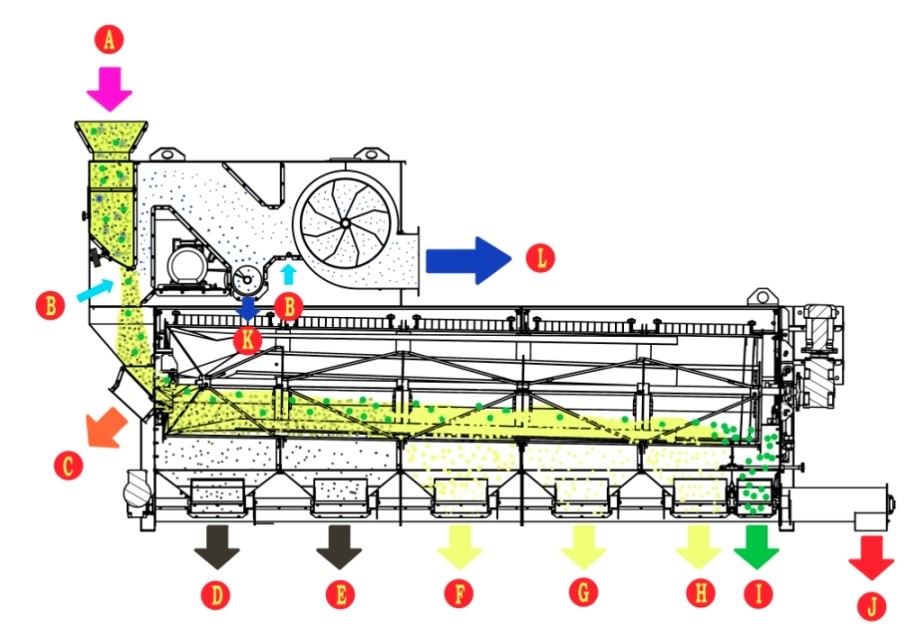 The operation scheme of the multifunctional grain cleaning machine OVS-355 in the cleaning and separation of grains of rape, wheat and peas.

In total, there are more than 50 operating schemes of the OVS-355.

E - unloading of a small fraction of the product (for example, rapeseed, millet)

G - unloading of the middle fraction of the product (e.g. wheat, barley)

I - unloading of large waste

L - clogged air from the fan (per cyclone)

One grain-cleaning machine OBC-355 can be used both for high-quality calibration and for preliminary treatment with large volumes of processing or separation and simultaneous cleaning of grain from three plants at once. There are more than 50 operating options for the OBC-355 separator.

When sorting and calibrating seeds, the effectiveness of sieves that remove fine debris and crushed grains through small perforated holes is very important. The performance of the purifier depends to a large extent on this. In a cleaner with flat sieves during operation, the mass of a layer of grain lying on the lower sieve interferes with its effective cleaning, regardless of whether a brush system, balls or other system is used. On the drum, the sieves are cleaned at the top of the cylinder, where there is no grain. As a result, grain passes easier and faster through openings on sieves.

The absence of vibrations reduces dynamic forces, which makes it possible to install OBC-355 on any existing foundation.

Due to the continuous movement and the absence of vibrations, each grain or particle is easier to enter the perforated holes. That is why drum cleaners are often used for accurate calibration. Five sieves are installed at once in the OBC-355 separator, which allows very precise separation of any grain or mixture of different grains.

In a flat-screened grain cleaner, the upper grill can remove only large particles, and the lower grinder can remove crushed and small grains. On the OBC-355 drum cleaner, each section can be used either to remove large particles or small ones. Depending on your needs, the order of operation of the cleaner changes easily. During calibration, the number of sieves determines the maximum number of separation fractions. In the separator OBC-355, 5 sieves were installed immediately. This makes it possible to separate and clean the grain mixture of three different plants at once, which is extremely important for organic farming.

In OBC-355, grain during the cleaning and separation process is always moved by gravity, which eliminates grain injury.

Use for products that are difficult to sort
The multifunctionality of the drum cleaner allows it to be used to separate and calibrate a wide range of products (for example: fiber and cotton seeds, corn with very high humidity, glass balls, etc.). One and the same installation can often be used both for high-quality calibration and for pre-cleaning with large volumes of processing.

A quick change of sieves is very important if sieves are selected to clean very clogged grain or to separate and clean the grain mix of various crops. Thanks to special fasteners, the process of replacing 1 sieve with an OBC-355 takes about 1 minute. This saves time and speeds up the grain cleaning process. 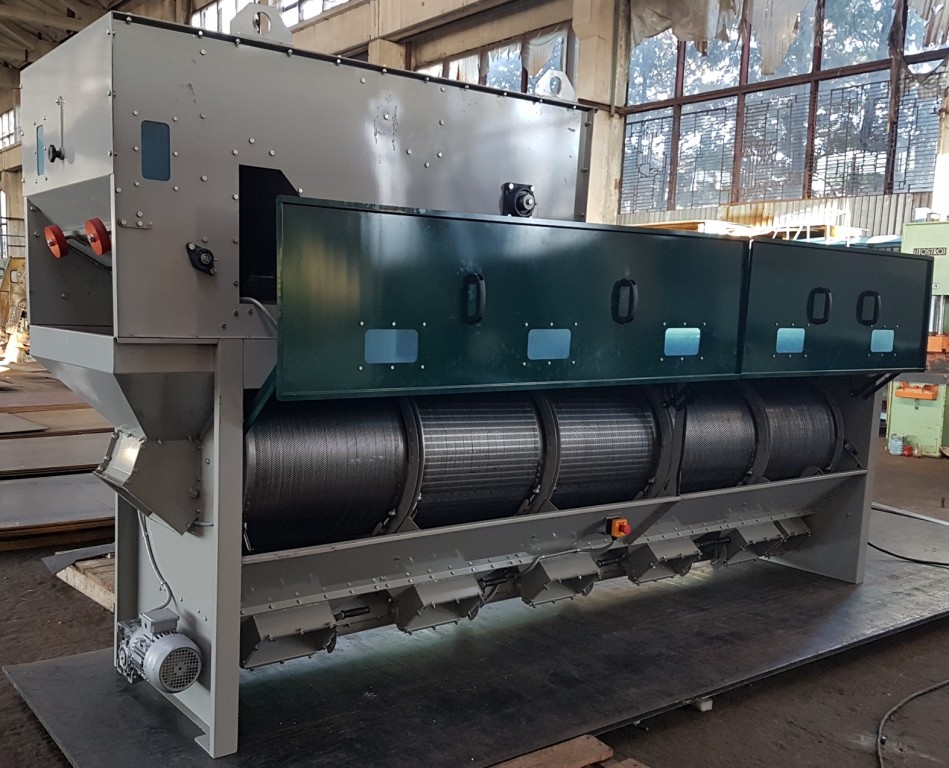